5 Things I Learnt from Having an Extension Built 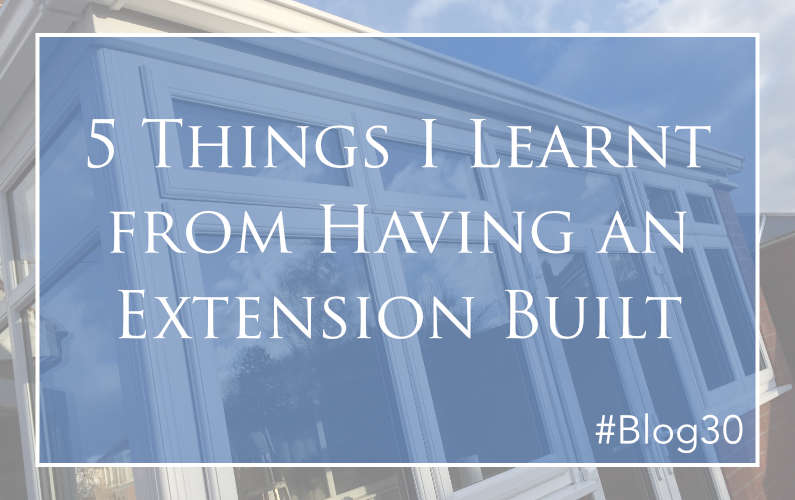 Let’s get this straight from the beginning … I am not a girlie girl! I do not spend hours poring over the latest glossy home magazines lusting after new kitchens or sofas. That’s what I have tech toys for 😉

However, given our conservatory was well over 30 years old and in dire need of replacement I had no choice but to venture into the alien territory of domestic rejuvenation literature. It wasn’t pleasant. I didn’t enjoy it. To be honest I wasn’t expecting to but then again I wasn’t expecting to learn anything from the experience either … well other than NEVER intending to do it again of course!

Strange then how things turn out because I learnt a lot.

Don’t Leave It Hoping for the “Right” Time

Believe me there is no right time for the level of disruption you’ll suffer when undertaking any kind of renovation work. Before the actual physical work starts there’s all the meetings needed to determine what your final vision is.

What did we do? Left it until September before we even contacted builders for quotes. Don’t do that! By the time we had had all those required meetings the final start date for the project was 1st November with an estimated duration of 4 weeks. Still that meant we should be done by the start of December so plenty of time to get ready for Christmas then.

The weather conspired to render day 1 a complete wash out, nothing got done. Day 2 was an improvement and by the end of the day the old structure was nestling neatly in a skip outside the front door. Half way there thought I … wrongly!

To cut an ever increasingly long story short the last workman left the building at 5pm on Christmas Eve.

Lesson? Everything takes at least twice as long as is expected.

Believe me when I say I had no desire to be reminded of the state of the conservatory we were getting rid of but I was dutifully out there on the first day of the build taking photographs of everything.

Wondering why? Well, I was working on the age-old premise of anything that can go wrong will go wrong! I wanted evidence of everything if only to allow me to capture the progress being made … for those moments when your faith and sanity is having a serious wobble!

However, as it panned out it was a good job I had been so diligent in the documenting of progress. As we neared the blissful end of the build there was the small matter of the side garden path being returned to its former glory after it was ripped up to facilitate the installation of additional drainage.

The job was complete according to the contractor. I headed out to inspect the work. It wasn’t right, not by a mile was it right. It was supposed to be the same shape as the original. Short version was: it wasn’t. I called the project manager and explained. He spoke to the contractor who disagreed with me. He assured the project manager that he had restored it to exactly the same shape as the original.

I dug out photos of the original path and gave the project manager both copies of the photos and a grand tour of the new path. It took only seconds for him to agree with me and get on the phone to the contractor ordering him to return and redo the work.

Lesson? Document everything, take photos of everything. Your future self will thank you.

Check Out All the Options

A drain? How far wrong could we all go? There’s a leading question!

The original plan was to install a sunken drain around the perimeter of the extension. Turns out that wasn’t going to work. Fair enough but we still needed to get water from the guttering to the drain.

The first alternative was a water butt. Not being able to source one that would fit was the first issue and the need to manually empty the thing was the second. It just wasn’t happening.

I failed to see why we couldn’t just link the new guttering to the existing down-pipe setup. I was assured that wasn’t possible … repeatedly.

Too stubborn to shift I refused to consider the less than visually appealing alternatives until the moment the installer was stood there with a piece of drain pipe in one hand and a saw in the other. I again explained what my preference was. The project manager again explained what I wanted just wasn’t possible.

At which point the person actually doing the job, the one with the drain pipe and saw if you’re following along, interjected and said there was no reason my preferred solution couldn’t be implemented.

Yay! And with only 3 months being told it couldn’t be done and numerous arguments about it.

Lesson? Stick to your guns until you’re completely out of options and time … you might just find you were right in the first place!

Remember the contractor and path? Sadly he was in charge of the plumbing too. It was a simple business he only needed to install a tap and outlet pipe inside the garage. How far wrong could he go? A rhetorical question I can assure you but if I were to address it the answer would be quite a way!

The outlet pipe that should have been a minimum of 3 feet from the floor was marked for installation no more than 3 inches from the floor. As if that wasn’t bad enough the tap was already installed … on the outside of the garage wall not the inside!

While the installation of the tap on the wrong side of the wall may seem a disaster it actually worked in our favour as we gained a water supply for use in the garden. That still left the placement of the inside tap and outlet pipe to be dealt with.

Fear not I had a plan, a foolproof plan. I deployed a Sharpie and in big bold letters I drew crosses on the wall where each item should be placed together with instructions.

I returned to find everything installed as requested.

Lesson? Never underestimate the ability of someone to completely misconstrue even the simplest of instructions.

I’m a night owl. A veteran, dyed in the wool, night owl. I have no problem working until first light and even beyond but ask me to get up in the morning and I’ll struggle, even after 10 hours sleep.

Obviously, with workmen coming in this schedule wasn’t an option. While I might prefer to work in the pitch black odds were they wouldn’t.

I decided I’d have to yield and I set about changing my schedule to match theirs. It wasn’t easy but since there was no alternative it happened.

Every morning I staggered into the kitchen, opened up for the entire workforce and after making them a morning brew I retreated to the relative peace of the front room to try to get some work done. Forget it … simply forget it! Between the noise, the dust and the seemingly interminable questions you’ll struggle to be able to think straight much less juggle the tasks comprising an average day. At least you will if your average day looks like mine usually does.

Lesson? Accept the inevitable upheaval a job like this entails and go with it.

Would I Do It Again?

I certainly hope I never have to do it again! However, if I did I’d feel far more confident given the lessons I learnt this time.