A Week Without My iPhone 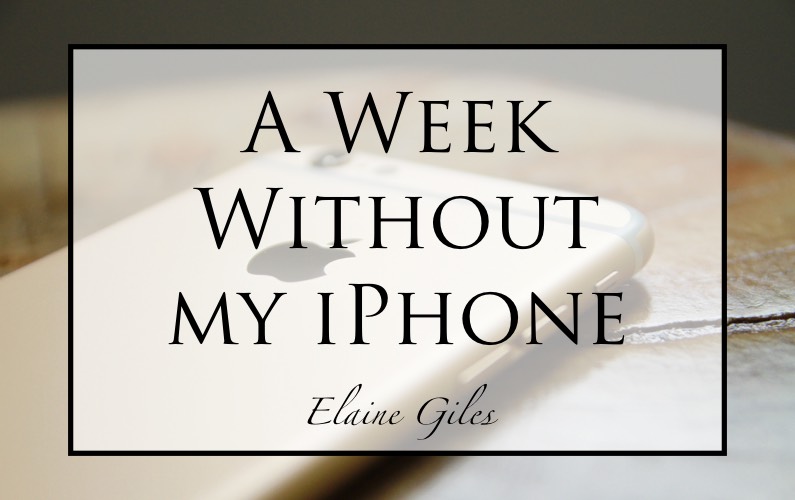 Today I'd thought I'd torment myself all over again by sharing something that happened a few weeks ago. You'll be glad to hear that I've just about recovered from the horror of the entire ordeal!

As usual as Lent approached there was much talk of what deprivations we were contemplating subjecting ourselves to this year. I swore off such torment back in the mid nineties when I rather foolishly decided to give up sweets and chocolate! For the record I kept my promise and survived the ordeal but pledged: NEVER AGAIN!

So imagine my horror when an abstinence of horrific magnitude was foisted upon me! A week without my iPhone? Why you may ask … I know I did! Let me explain.

I awoke in late-February to discover my trusty iPhone 6+ in a catatonic state. The screen was on but showing only a sad looking faded grey Apple logo. It remained unresponsive until the screen slowly darkened around the edges and finally faded into complete ennui.

No amount of gentle cajoling persuaded it to bestir itself so it was off to the Genius Bar, or was it?

I've been an Apple user long enough to recall taking a poorly iMac in to a store on a Monday night and having it returned to me in full working order by Thursday of the same week. Chances of that today? Non-existent. The first free appointment they had for iPhone repairs was Tuesday of next week – an agonising 8 days away.

The only alternative was to risk gambling on the "walk-in" lottery. My previous experience of this did not augur well for a repeat performance but I was out of options.

I dutifully arrived at the Trafford Centre just before 9:30am, early enough I figured since they don't open until 10:00am. Silly me! The queue for the Apple Store was already extending outwards from the store in several different directions. Inside the usual morning rah-rah session was in full swing and I seemed to be the only one within wi-fi range without a functional iOS device.

Just before opening time two Apple staff members made their way out of the store to organise the queue, one side of the store for purchases and the other for repairs. Sadly the repairs queue extended way beyond that of the purchase line. There must have been at least 60 to 70 in the repairs queue but only about 5 looking to make a new purchase.

Still at least I only had 4 others in front of me. To my amazement once I gave them my name and brief details of the issue I was taken straight to a member of the Genius Bar staff who authorised an immediate replacement.

I know! I was amazed too. The entire process from entering the store to leaving with a replacement iPhone took only 20 minutes.

Restoring from my backup and getting the phone back to feeling like mine took most of the rest of the day, But hey at least I was at home with my feet up while it strutted its restoring stuff not sat in the Apple Store for over 4 hours like last time.

Lessons to be learnt? Well I was certainly glad I'd had the foresight to purchase AppleCare with my iPhone. I know the European registration should be enough to ensure I'm covered for incidents such as these but I'd rather not have to argue the point. It's stressful enough trying to cope without my phone without having to rely on my previous career as a lawyer to return calm serenity to my life!

Another lesson is to be sure you always have a recent backup to restore to. I had a fully up to date backup available via iTunes so the restore was as painless as it could be and no data was lost. Had I not had such a backup the story could have had a very different ending. Most of my data is stored is in various cloud services but photos taken on the phone are not nor was there a second copy of recordings I make using iTalk Premium. I'm making sure I back those up every day now.

When was the last time you backed up all your devices? Have you ever checked those backups actually work? There's a scary thought to leave you with!