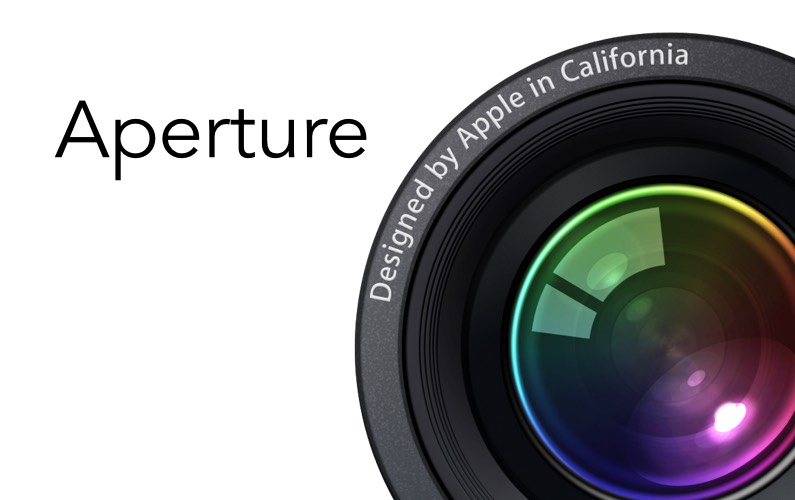 Aperture 3 was announced and released on 9 February 2010. The release coincided with the start of Macworld but Apple’s absence meant that the launch was without the fanfare reserved for Steve-notes.

I was eager enough to order online via the Apple Store immediately. Yes without even installing the trial. Of course installing the trial would have been much easier had Apple had the courtesy to send me the promised download link and serial number after I had duly completed the request form on their web site but let’s assume they were inundated and it’s non-appearance wasn’t anything personal!

The “over 200 new features” looked promising too. While some of these features were playing catch up to Lightroom others went beyond what is already in Lightroom 2 or promised for Lightroom 3. I also have clients using Aperture so not purchasing wasn’t really an option.

Some of the new features I was eagerly awaiting included the chromatic aberration filter to reduce the purple fringing found on many digital images and the halo reduction feature to further refine images. Non destructive brushes with edge detection also augured well for the future of my images.

The ability to segment libraries to facilitate a mobile workflow sounded genius as well. Even better the hived off library could have changes synched back to the main library. For those with huge libraries that alone would be worth the upgrade to version 3.

I was personally looking forward to testing the GPS import from iPhone photos. The idea being to use the iPhone images as GPS co-ordinate carriers for the DSLR images shot at the same location. I had tried doing this manually but quickly gave it up as too time consuming.

The smaller enhancements to the new version included the long awaited inclusion of coloured labels which brings Aperture more in to line with Lightroom which has had such taxonomy niceties since the very earliest betas of version 1.

Of less significance to me was the ability to catalog video files but with many cameras now supporting video it was a logical inclusion.

Anyway, enough of what might have been! The shrink wrapped box arrived on Friday, by the way cheers for the second class post Apple, and that was when things started to go downhill.

Installation was a breeze when compared to the hours it took me to install Final Cut Studio the day before. Sadly the elation of that installation was the high point of a very disappointing day. 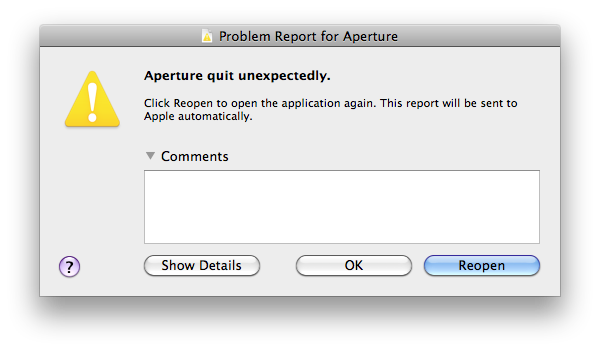 Deeming it a blip I tried again and managed to get a little further. I could get to the Getting Started dialog box but none of the videos would play. Figuring I could worry about that later I copied the sample library catalog off the installation disc and set about investigating the new features.

First impression had to be just how slow it was running. Not just a little sluggish but direly slow. Clicking anything seemed to make Aperture slow to a crawl.

I managed to get a sample image loaded in and tried the new adjustment brushes. The results were very impressive but each brush stroke required over 30 seconds of processing.

Even using the loupe required an interminable wait while the image re-rendered.

A check of the Activity Monitor confirmed my intuition, the machine was being maxed out.

This is no underpowered machine either, it’s an early 2009 24 inch iMac with 4GB RAM and 3.06GHz processor.

I did all the right things: repairing permissions before and after install, repairing and rebuilding the library, creating a new library and even closing down all other applications. The outcome was the same each time Aperture slowed down to a crawl after varying amounts of time and/or processing.

Those few clients who tried the new version over the weekend have already been on the phone with corrupt catalogs, speed issues and are rolling back today.

With some software I wait to upgrade but I admit I expect better from Apple. At the very least I expect I won’t have to wait before enjoying the new features of a release that has been two years in the coming.

This version of Aperture doesn’t feel ready for release. I can’t use this in this state. I can’t recommend to clients that they risk their businesses using it either.

I didn’t take any consolation from not being alone in having serious issues with Aperture 3, reports are plentiful of major issues both from third party sites such as Gizmodo and TechTree as well as Apple’s own Aperture forums.

I sincerely hope Apple take on board the feedback and release updates as a matter of urgency that address the issues.

It’s instability isn’t as major an issue for me as it might be for some as I’ve always used both Aperture and Lightroom, yes together, and yes with the same images. I have a system in place where the images are referred on the hard drive rather than imported and it’s been working well for almost 4 years.

So in the meantime I’m using Lightroom 3 Beta, a product that clearly states it’s in beta and as such comes with all the usual caveats that status implies. However, it has not crashed once for me. I was sufficiently confident in it’s stability to do a live demonstration of it’s new features to my user group in January. It’s much faster than Lightroom 2, which was no slouch itself, and the new extensible architecture is heralding an exciting future for a product that holds a special place in my heart for bringing me to the Mac platform way back in the days of the beta of version 1.