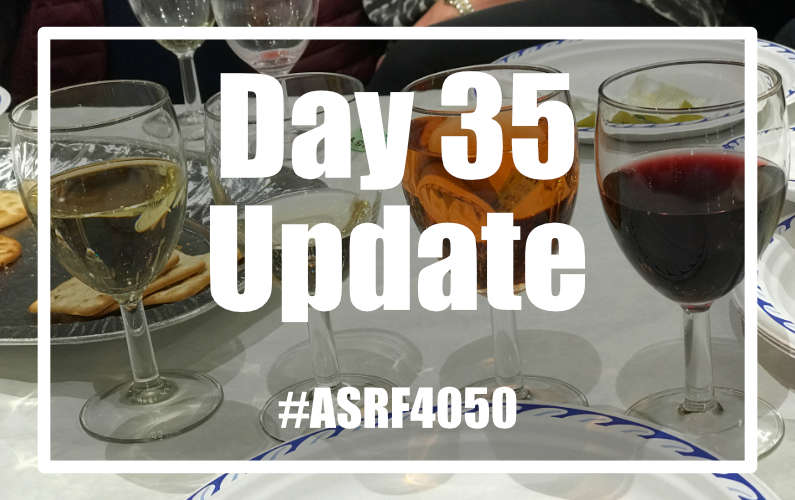 The morning after the night before … still as great in hindsight but some sleep might have been a good idea as I struggled to focus on the bike this morning!

I somehow managed to complete the entire 40 km by lunchtime which gave me a few short hours for work before I headed off out for the night … again!

Tonight’s entertainment was a wine tasting evening. I know what you’re thinking: “But Elaine you don’t drink” and indeed I don’t but if you think I was missing the opportunity to enjoy a night out with friends you’re deluded. I just intended to ensure I took plenty of fresh water with me … last of the party girls that’s me!

Mike again spent the day working from home and while not until midnight as earlier in the week his evening schedule meant he would still miss most of the wine tasting evening.

Never fear though, all those attending had a plan! As each glass was poured in the blind tasting we snagged a glass for Mike and lined them up. By the time he arrived he had some serious catching up to do!

Mike gamely consumed as much as time allowed and then we were off to an “After Party”. Now this is where being the sober one has advantages as I was able to drive and thus ferry folks to said after party.

We drank, we chatted, we put the world to rights, we sang and finally consumed bacon butties (don’t ask!) until almost 4am when we fell into bed even more exhausted than the previous nights this week!