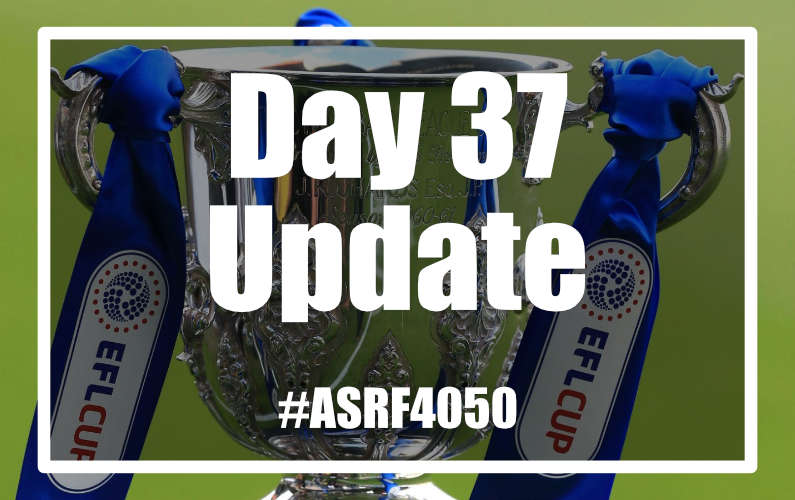 We were up alarmingly early this morning ready for Mass and for once, very unusually, we had nothing planned after tea at the Parish Centre but that won’t last as Fr Ned has raffle tickets in his sights … AGAIN! Yes, Mike and I, the demon raffle ticket sellers, will be on the prowl again from next week. You might want to warn your wallet of this 😂

If you’re wondering what the prize is this time let me enlighten you! We have a signed Manchester United shirt in a huge presentation box. All funds will be going to the roof fund. I was plotting how to sell to the City fans when an excellent suggestion of including a free box of matches if a blue wins was made! Thanks Andy 🙂

I’ve also been playing catch up with the blog posts for #ASRF4050. It’s time consuming enough to actually do the 40 km each day meaning blogging about it is taking second place to actually doing it … I need to rectify that!

We managed a leisurely lunch. What I hear you ask? Why foliage of course! But the highlight of the day was to be the EFL Cup Final or as we call it “The Tin Pot” in my youth it was the League Cup but since those heady days it has had more names than anyone other than Wikipedia can recall.

United were playing Southampton and whilst they could have played better they managed to stagger to victory. Ibrahimovic is the nearest thing to Eric Cantona I’ve seen in twenty years so all was good today.

I also have a fondness for the League Cup as it was back when United won it for the first time that Mike and I started seeing each other. That very day! ❤️