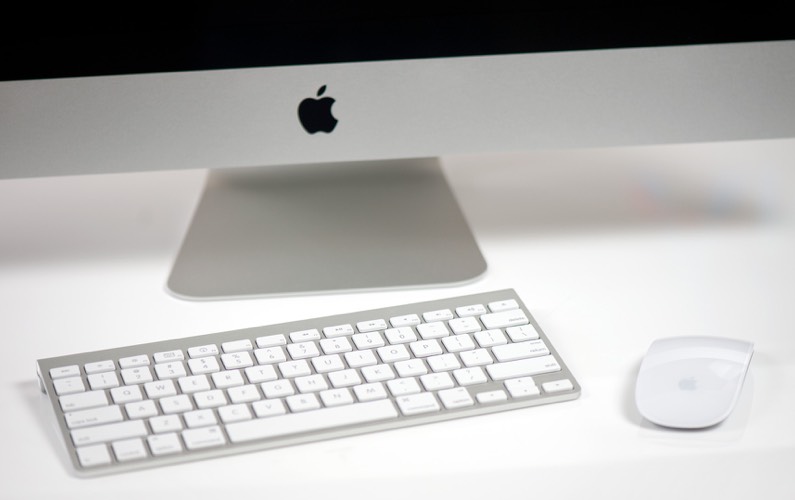 In the midst of the iMac fiasco I made the decision to buy a Mac Mini. I’d toyed with purchasing one before deciding to wait for the inevitable upgrades – trouble was Apple took far longer than I anticipated to upgrade the Mini.

Well the upgrades finally arrived and I bought a base model priced at £499.

I had a specific job in mind for the machine, as well as it being a spare system available in the case of a failure elsewhere. That job was for it to act as a host for several external hard drives and the two office printers. By hosting the external drives on the Mini I would be able to run backups and archive data to discs without impacting the performance of my main workstation.

Now there would be no point in opting for the Mini for compactness and then having to find space for a monitor. For this reason I had planned to use the Mini in headless mode, i.e. without a keyboard, mouse and monitor, via Screen Sharing.

I’m not naive enough to think there wouldn’t be a few gotchas along the way but the show-stopper came as a surprise!

For initial setup I had no alternative but to use a keyboard, mouse and monitor. Everything went smoothly and once the operating system was configured sufficiently I disconnected all the extraneous equipment.

First problem: when OS X boots without a keyboard and/or mouse the system, by default, searches for a bluetooth version of each and while this search is ongoing a dialog box is displayed on the screen and with no way to close it you’re stuck. This one wasn’t too tricky to solve. 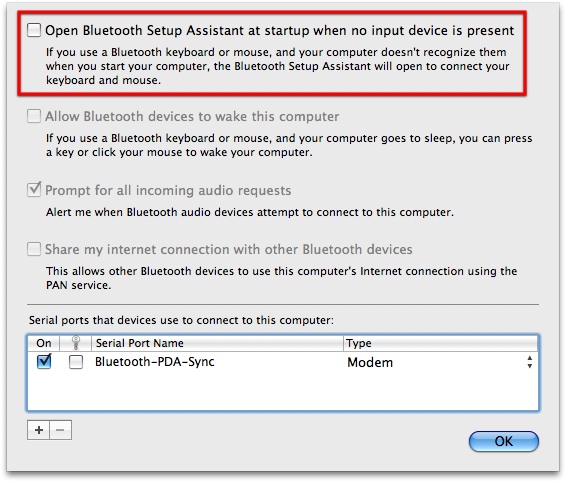 Uncheck the “Open Bluetooth Setup Assistant at startup when no input device is present” and you’ll never be troubled with complaints about a keyboard or mouse again.

Second problem: much worse and one I certainly hadn’t foreseen … the curious case of Toast!

I have a love/hate relationship with Toast. I love the way it’s integrated into many applications, such as Elgato EyeTV, allowing a disc burn process to be instigated from within that software.

I hate the way Roxio impose an annual upgrade tax. Every year (usually in January at Macworld) they announce a new version which does pretty much the same as the last version with the possible addition of a few bells and whistles I’m unlikely to use. Now, knowing me I’d probably upgrade anyway if the upgrade price was realistic. Sadly, Roxio’s upgrade pricing is ridiculous, often meaning an “upgrade” is 80% to 90% of the price of the full product.

If it burns a disc I’m happy so I made the decision not to upgrade from version 8, which was the first version I bought. It was also the first universal binary version. I wasn’t sold on the interface “improvements” either so it was no hardship not to upgrade.

So I install Toast 8 on the Mini, check for all updates and run the application. The application icon bounces in the dock twice and then vanishes. Figuring it was a blip I run it again with the same result. I reboot and try again, same result. OK so clearly there’s something wrong: I uninstall and reinstall, same result.

Then I begin running through the mental checklist of why something would run perfectly on one system but not another. It didn’t take long for me to make the connection that one system had a monitor and the Mini didn’t. But wait, since when is a monitor a prerequisite for burning a disc?

Pedantically I check the system requirements for Toast 8 and it doesn’t mention NEEDING a monitor. I appreciate most systems will have one for obvious reasons but there must be system administrators running servers or other machines headless.

I start to Google the issue and guess what? I’m not alone, my supposition was correct, other users have found the same issue and not just with Toast 8 but also Toast 7 and Toast 9. No updates or patches are available so it just isn’t going to work. I briefly consider upgrading to Toast 10 but there is no information available as to whether this show stopping bug is fixed in this version either. Strangely there is no trial version of Toast available either, so try before you buy is not an option either.

I was sure I had some other disc burning software in one of the earliest software bundles I bought so I dig it out and yes it might be basic but it should do the simple job of allowing me to burn a DVD data disc. The software in question, Disco, wouldn’t run at all.

To burn a disc, such a simple requirement, yet here I was struggling to find a piece of software willing to do it. (I know the Operating System can do it but there are niceties in burning software that Leopard doesn’t provide.)

A trip to MacUpdate.com leads to the discovery of a free disc burning application called simply Burn. It installed, it ran and yes it burned a disc!

It now has pride of place on my Mini as the disc burning application of choice.

As for Toast well I doubt they intend to fix the problem affecting so many users of versions 7, 8 and 9 because version 10 runs perfectly in headless mode. Finally, a real reason to update but I have no intention of doing so because I feel let down by a company who have a crippled product and the only way for me to be able to use it is to give them more money.

Roxio get your house in order.