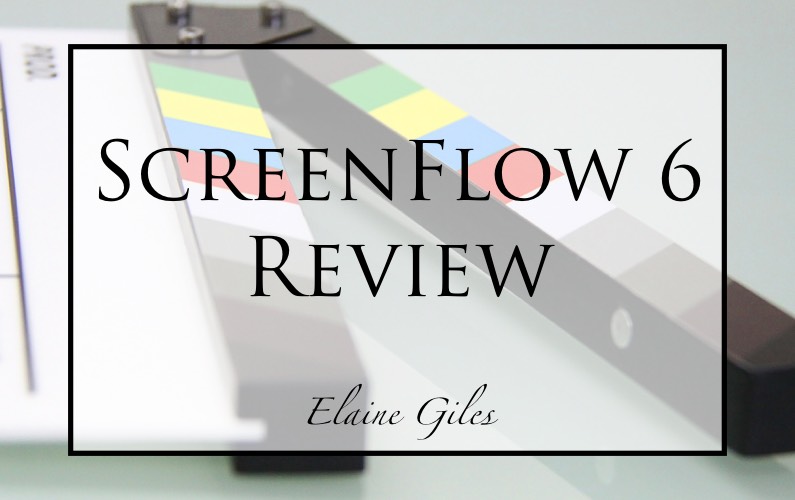 ScreenFlow is one of those rare easy-to-use yet professional level must-have apps for the Mac Platform. It is a screencasting studio allowing users to record, edit and share professional screencasts.

Owned by Telestream since August 2008, ScreenFlow 6 was released on the 1st of June 2016 and on the surface very little has changed with the minimalist interface since the first version. Sure there have been tweaks to the interface but fundamentally if you came to version 6 from that original version, or indeed any previous version, you wouldn’t feel lost.

Before looking at what’s new it’s worthwhile outlining why ScreenFlow has been my go-to screencasting tool for over 8 years.

ScreenFlow has been that go-to app for screen capture since Vara Software released version 1 in February 2008. The simple interface belies the rich range of options ScreenFlow boasts and it’s now painful to recall life before ScreenFlow! There are numerous screen capture apps available for Mac now but back then Snapz Pro X from Ambrosia ruled the roost. The major innovation ScreenFlow 1 brought was the ability to capture the video and decide later what format the final output should be. In fact that two pass workflow (capture/post processing) meant you had the flexibility to output the same recording to multiple file formats after the event. That flexibility was lacking in all capture apps until then. It meant a complete rethink as to the most productive workflow but the benefits were well worth it.

The first killer feature is the “record first, configure later” workflow. It was a revelation when version 1 arrived and it remains the most flexible and convenient way to screencast today. I now create a minimum of three different versions of each video I produce and I do all that from a single recording. Using the same source file for each export means no duplicate processing and inherent loss of quality.

ScreenFlow can capture your screen, video from attached cameras, device audio and system audio. This one stop shop approach is a great time saver both during the initial capture and during the subsequent edit.

ScreenFlow is extremely reliable in use. There is very little impact on the speed of my system while I record. I’m thankful the days of the mouse pointer staggering across the screen in episodes when you attempt to record the screen are gone. Longer duration recordings don’t kill the system either, I have recorded over 12 hours of screencast content in a single file without issue.

Editing files is a smooth process. When I have used other editors, for example Final Cut Pro X, the time it takes to render the edited video before it can preview it slowed me down considerably. ScreenFlow doesn’t have any issue with previewing edited video, everything plays instantly. It’s simply a joy to edit in ScreenFlow.

In testing this version I processed over 3.5TB of recordings.

By far the most lauded new feature is Partial Screen Capture. It’s surprising that it’s taken until version 6 for this seemingly critical feature to be added to ScreenFlow but I can understand why that’s so: For the simple reason you really don’t need it! Crazy? No, let me explain.

ScreenFlow’s two-pass workflow means that you can edit the capture after you capture it and that includes adjusting what is contained in the output in terms of cropping to a specific window or outputting a file of specific dimensions other than that recorded. The benefit of recording the entire screen is that when the Mac throws a dialog box up outside your recording area it will be captured without having to manually drag it to the correct location at the time of recording and potentially edit the transition later.

Not a killer feature for me but more of a nice-to-have feature that brings ScreenFlow in line with the many other screen recording applications available today.

While you could be forgiven for thinking animated GIFs are a relic of the 90’s web that are best left there, you’d be missing the opportunity to use those animated GIFs in more practical ways. For ultra short demonstrations of a simple feature, attached to a Tweet, or as content for newsletters where video is unavailable they are hard to beat. ScreenFlow can now create them directly.

While it was always possible to manipulate the timeline to create video animations version 6 adds a dedicated panel and a range of configuration options for doing so.

The new motion-animated effects are titled Spring, Gravity, Pulse. They are simple to apply to elements and the physics of the movement are controlled using sliders in the Video Animation Effects panel.

Here are a few examples of what you can achieve with each effect.

Replace clip is the ability to select a clip on the timeline, right click and elect to replace it with a different clip. Where have you been all my life!

For exchanging elements in previously composed timelines this is a huge time saver. Personally I have a file that I use as a template for certain projects, duplicating it as required for new videos. I have placeholders on the timeline and until now I have had to manually replace these, repositioning and adjusting them to fit. Now it’s a simple matter of swapping out the placeholder with the new content.

The UI improvements are very subtle but most welcome. The addition of three small icons at the bottom of the ScreenFlow window gives you quick access to toggling timeline snapping, thumbnail display and audio waveform display. Adding easier access to these features may only save a few seconds but it certainly makes it easier to manage your timeline.

The ability to publish to the Telestream Cloud may be useful for some but this requires an extra investment in terms of a cost per file processed.

In addition to the ability to publish to the Telestream Cloud there is an option to encode your videos directly in the cloud. This gives you access to a huge range of extra encoding formats.

It’s almost inevitable in these days of instant outrage that the change to the icon came in for immediate criticism!

It’s not like the icon hasn’t changed before and you don’t really have to stare at it while you’re working but still I can understand a little disorientation for some folks! (Said the woman who studiously replaces the Sublime Text icon every time she updates the app 😉 )

If you’re wondering, the new icon is much flatter but with a hat tip to the original style of icon that has, until now, only changed in colour with various updates.

There are other new features including:

A small change but it’s proved to be difficult for my fingers and brain to come to an agreement as to what I’m trying to do! Luckily it can be reverted to the previous behaviour in the Preferences.

Don’t get me going!

Six versions on in the life of ScreenFlow and we still don’t have the ability to create templates.

I hanker after templates for two broad reasons.

First, to have a timeline containing elements I use in every video of a specific type. For example, my YouTube videos all have a short motion graphic at the beginning and a recap at the end. Then there’s the watermark over the entire length of the video and various other overlays and annotations.

Secondly, a template system would ensure that I don’t have to repeatedly set my preferences for the Media Library.

I prefer to have the duration overlays shown on each clip, arrange the clips by name and group them by type. None of those options are the default though and thus every time I make a recording I need to set them manually. Templates would solve that problem instantly.

In a similar way that a template can be a valuable time saver so can access to an asset library. The Windows version of Camtasia has a fantastic library system. Version 1 of Camtasia for Mac had a library system that sadly vanished when version 2 was released. Having access to the entire range of assets you might need from a single location during the editing process would be such a time saver.

There is access to system media libraries, iTunes, iPhoto, GarageBand et al, from the Media Library panel but seriously do you keep your screencasting audio assets in iTunes? Your visual assets in iPhoto or Photos? I know I certainly don’t!

Annotations and text only exist in ScreenFlow when they are on the timeline. This means to have a range of common keyboard shortcuts available for use in a video you would have to have all of them on the timeline, copy and paste them in to place during the edit and then delete the leftovers when you’ve finished.

Telestream will you add a library feature already!

Another feature currently missing is the ability to easily fix errors in a recording by freezing a portion of the screen. This term comes from a fantastic feature Camtasia for Mac has called Freeze Region.

Imagine you’ve recorded your content and the only issue is that during your recording an errant dialog box or notification flashed across your screen. Freeze Region is the option that can easily repair your recording. You set an in point where the recording isn’t showing the errant element and an output when it’s gone. Camtasia then replaces the element with the content of the screen prior to it appearing.

The same effect can be achieved manually but it takes much longer.

Batch Export of Multiple Clips from a Single File

One feature I would love to see is the ability to batch export multiple clips from a single file. I’d anticipate using the markers feature to mark the relevant parts of the recording and then export them in a single pass.

While there is a plethora of utility apps that provide the same or similar features it would simplify the process of screen recording greatly if much of the “housekeeping” were taken care of by ScreenFlow.

My toolkit for handling all of these options includes:

There are now numerous alternatives to ScreenFlow, with more arriving almost weekly. The alternatives vary in both price and features.

I have a couple of the alternatives installed for situations when ScreenFlow is having a moment!

My favourites of the alternatives are Camtasia, Screenflick and Screenium, although I will admit to owning them all!

No it’s not as crazy as it sounds, honestly!

Seriously, not only does it mean I have a backup in the case of an errant update but it means I can record multiple screens at the same time. Using three different apps I’ve recorded my three screens and edited the footage together in post.

The Mac App Store price is $99.99/£79.99 and there is no update pricing available, in line with Apple’s policy precluding update pricing.

You do have an option to upgrade from a Mac App Store license to a direct license for version 6 via the Telestream website though.

Should you buy direct from Telestream or via the Mac App Store?

In terms of functionality of ScreenFlow it doesn’t matter how you make your purchase. In terms of how quickly you have access to incremental point updates and how you upgrade in the future it very much does.

Direct purchases qualify for upgrade pricing. Mac App Store purchases do not. It is for this reason that Telestream usually reduce the price of ScreenFlow for a few days on the Mac App Store when they release a new version.

Very recent purchasers can upgrade free of charge if they purchased directly too.

The very nature of the Mac App Store review process means that direct purchasers have access to updates faster than those buying via the Store. That might be an important consideration for you if you encounter a show stopping bug in the current version.