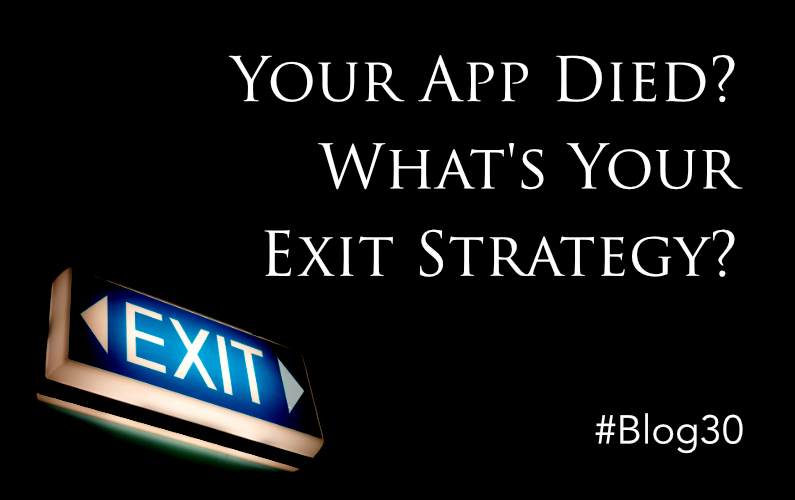 If you’ve used technology for more than 10 minutes you’ll doubtless have encountered that gut-wrenching moment when news breaks that your favourite app is sunsetting. Sunsetting? Yes, “sunsetting” a concept Google have liberally applied to many of their services over the years. In simple terms it means you’re out of luck; that product, service or app you used to rely on is no more or at least it will be no more after a long drawn out demise.

Since I’ve used computers since the early 80s it’s happened to me more times than I care to recall. The burning question is: What can you do about it?

If we rule out throwing all your toys out of the pram (I’ve tried that, it does no good!) then we’re left with formulating an effective plan to replace the functionality that’s about to vanish.

MacBites After Hours attendees may recall me mentioning a fantastic app for marking up screen shots called Napkin. It won numerous awards, it was lauded by tech journalists who used it for their content creation and was pitched as a professional level app with a price tag to match. I bought it via the Mac App Store in November 2013 paying £27.99 for the privilege!

I’d mentioned it in MacBites After Hours with a view to doing a demonstration of its feature set but when I checked the Mac App Store the app was no longer available. As I already had it installed I can of course continue to use it as long as it isn’t adversely affected by any Apple system updates. However, who wants to continually rely on an app that you know will never get updated? It isn’t a viable situation for the future.

Fast forward a few weeks and the same thing happened again. This time I was deep in the preparations for #Blog30 and was outlining a post about the ways in which I highlight my screen and specific content on my screen using a range of various tools. One of these was ZoomIt for macOS. Its sole function was to highlight an area of my screen by increasing its size and displaying a loupe around the zoomed in area. It was invaluable when dealing with smaller or more intricate areas of app interfaces. When creating screencasts you can do all of this in post production but when you’re working live, as I often do, you need an app that can work in real time.

Again I had logged into the Mac App Store to confirm the price only to discover that the app was no longer available for sale. Since I already had it installed I am able to carry on using it until it no longer works but I was instantly on alert that going forward I would no longer be able to rely on ZoomIt.

So what was my exit strategy?

That might sound strange but I have encountered situations where when I carefully consider the functionality provided I didn’t actually need it. A case in point was an app called Apptivate it’s sole function was to run apps using a keyboard shortcut. I was using it to elegantly show and hide Keynote during live demonstrations. A system update meant it didn’t work in the way I needed and I was left in need of an alternative. I realized that since I already had Alfred and Keyboard Maestro at my disposal Appivate had not actually been providing any functionality beyond what I already had access to.

Ask yourself what the core features are that you need. There is lots of fluff in apps and it’s easy to dismiss one that would do at least part of the job.

Let’s do that with ZoomIt as the requirements are fairly simple, certainly simpler than those for either a screen recording app or an audio editor for example.

Nice to Have Features

Armed with the details of precisely what I needed I set about searching the App Store for something suitable. Another issue with the App Store is the lack of a way to trial the software so you are left reading reviews and hoping!

I did find one possible app but wasn’t sold on it. The next thing I did was search the internet which proved to be more fruitful. There were many articles about macOS accessibility features. I knew all about those! I use the screen zoom option all the time. It was introduced many years ago and since it arrived the way I’d used it was to hold the control key down and scroll the mouse up and down as required. What actually happened was that the entire screen was zoomed up around the position of the mouse pointer. In effect the entire screen was being treated as a loupe and you could zoom in as far as you liked. I’d thought of using that option instead of ZoomIt before since it’s built in to the OS and as such guaranteed to work. The only issue is it doesn’t work when you’re live streaming. The software used for the live broadcasting gets very upset if the screen resolution changes at system level in any way whatsoever during the broadcast.

So I was instantly ready to dismiss the built in option when I spotted the fact that Apple had actually changed and extended the feature. The picture-in-picture option looked hopeful. Anything was worth a try so I dutifully dived in and spent a good hour or so configuring and re-configuring the options to ensure they would do what I needed.

Once you have ascertained that your requirements are met by the replacement app you get to the best bit!

What’s the best bit? Exploring the new app for features that your now defunct app didn’t have. I love this part of the process. There’s nothing better than discovering features that will improve your entire workflow.

My switch from Adobe Audition to Hindenburg for editing audio is a classic example of this. Once I’d established that Hindenburg had all the essential features and enough of the nice to have features for me to be able successfully transition to it the fun really began. I set about learning other features within Hindenburg that eventually skyrocketed my audio editing productivity.

The Glass Really Can Be Half Full

So despite the initial inevitable despair at the point you discover an app you rely on is no more the final result doesn’t need to be a productivity disaster. Keep positive and approach the issue with an open mind and a pragmatic attitude replete with checklists of your must have features, your nice to have features and enjoy discovering exciting new features.