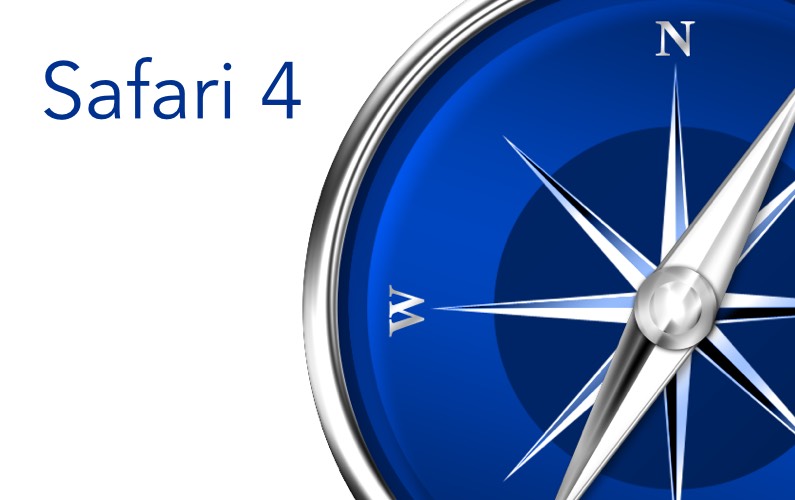 So after a fantastic night chatting with MacBiters in the MacBites chat room during WWDC I eagerly downloaded the release version of Safari and installed it.

While I’m installing I ponder the slightly surprising decision to revert the top mounted tabs to their original location but I’m sure I’ll get used it again.

Trouble is after downloading it and installing it I didn’t get as far as seeing the tabs. Instead I was greeted with this: 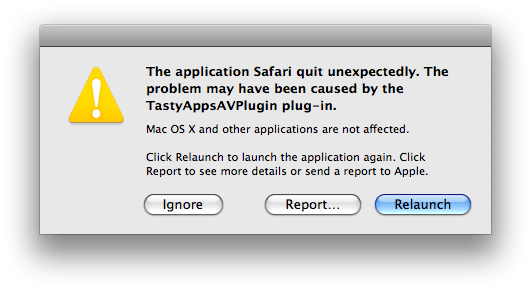 I immediately recognize the TastyAppsAVPlugin referred to as being the plug-in aspect of Web Snapper from Tasty Apps.

A simple matter of uninstalling Web Snapper, confirmed by the Web Snapper FAQ. Just to be sure though I use AppZapper which removes a couple of plist files in addition to the Web Snapper application in the Applications folder.

I tried again but no joy, Safari 4 still couldn’t get past the error message.

A little more digging around the file system and I found the solution.

There were two copies of a file called TastyAppsAVPlugin.bundle in the following locations:

Deleting both these files solved the problem and I’m happily running the release version of Safari 4.

I do hope Tasty Apps manage to get Web Snapper working correctly with Safari 4 though as I use it almost every day. It allows you to save a copy of an entire web page (i.e. beyond the fold) in PDF format bypassing the print.css and without requesting the URL again which makes it perfect for making copies of receipts during online purchases.

I hate it when new toys break old favourites 😉

A quick mail to TastyApps support and I’m informed that the offending file actually belongs to another of their applications, VideoBox. They already had a revised version available.

So I removed the version of VideoBox I had installed and download the latest versions of both Web Snapper and VideoBox. I installed both and yes everything now works perfectly, in fact I think VideoBox is working better than it did before!

BIG thanks to the support team and developers at TastyApps who got the fix out in record time.